We are proud to offer many different models of cryopumps with proven reliability, excellent performance and quality.

1.Cooldown Characteristics
The vacuum chamber must be rough pumped before cryopumping since cryopumps cannot start its operation from atmospheric pressure. When rough pumping a CRYO-U® cryopump with a rotary pump, roughing pressure of 40Pa is sufficient since backflow of oil vapor will not occur. The residual gas will be adsorbed to adsorbent inside cryopump.
Cooldown time differs depending on conditions as shown in table below.

Cooldown time is affected by regeneration method. Use of N2 purge or Band Heater may extend the cooldown time causing temperature rise, or dry condition which hardly achieves vacuum insulation. Also, slight leakage may cause extended cooldown time or cooldown failure.(Especially due to leakage from pressure relief valve.) Cooldown time may be reduced by 10 to 15% at 60Hz compared to that at 50Hz.
Generally, cooldown time is defined as the amount of time for 15K cryopanel temperature to drop to 20K or below. See Table 2 for details.

A group of gases such as N2、Ar、CO、O2 and other gases of similar molecular weight are condensed and pumped at 20K or below, therefore they are not condensed on 80K baffle and shield. In general, the limit temperature that gases can be pumped by condensation is 20K. The temperature of condensing array when condensation probability of gases becomes below one at 300K is:
N2 ：approx. 23K
Ar ：approx. 27K
Also, the temperature when cryopump loses its pumping ability is:
N2 ：approx. 27K
Ar ：approx. 29K
As you see, the capture probability(sticking coefficient) of condensing array for condensable gases is one, provided the temperature of cryosurface is below 20K. Also, cryopump pumping speed at molecular flow region is constant since the conductance from inlet to cryopanel is constant at molecular flow region.
The speed values given in brochures are pumping speed for nitrogen at molecular flow region. Pumping speed for condensable gases of molecular weight M other than nitrogen can be calculated by following equations.
SM=SN2×(28／M)1/ 2（L/s）・・・・・・・(1)
SN
2：Pumping Speed for Nitrogen（L/s） 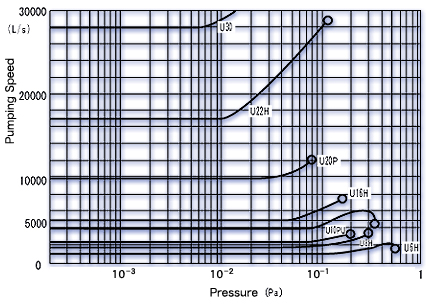 Table 3.Pumping Speed of Various Cryopump for Nitrogen(Value from Brochure)

When gas flow changes from molecular flow to intermediate flow(transition flow), pumping speed increases since the conductance increases proportional to the pressure. However, since incoming heat increases as pressure increases, cryopump reaches its limit of pumping ability when the thermal load exceeds cold head refrigerating capacity. ULVAC CRYOGENICS defines the flow rate when the cryopanel reaches 20K by the thermal load as the maximum throughput.（The point marked “○” in Figure 2.） The maximum throughput may be increased with large refrigerating capacity, but it may generate temperature gradient in thickness direction since the thermal conductivity for cryoarray is limited even with a large refrigerating capacity. If the temperature of condensation array becomes too high exceeding its limit, gases will not be condensed, and then pumping capacity becomes zero. That is to say a physical limit of pumping.

The next group of gases such as hydrogen, helium, and neon will not condense at 20K and will not be pumped efficiently by metal surface because the equilibrium vapor pressure for cryosorption will be too high. These gases cannot be pumped through condensation, therefore adsorbent cooled below 20K is provided to adsorb these gases. The pumping speed will decrease as the surface coverage increases. When the pumping speed is down to 80% of its starting value, the total amount of pumped gases is defined as the pumping capacity. (see below.) Pumping speed for non-condensable gases depends on the following:
(１)Adsorption Probability of Adsorbent Influenced Factors Below.
①Characteristics, Installation Method, and Configuration of Adsorbent
②Temperature and Amount of Adsorbent
③Rate of Degassing
④Kinds and Amount of Gases Previously Adsorbed
⑤Flow Rate and Temperature of Gases
(２)Arrival Rate of Gas from Inlet to Adsorbent (Conductance)
Typically the pumping speed is determined in accordance with test results. Pumping speed for gases with large amount of adsorption such as hydrogen and neon is constant at molecular flow region. Temperature of cryopanel rises as gas flow rate increases, and the flow rate at 20K is defined as the maximum throughput. For non-condensable gases, pumping at the maximum throughput or around may be performed for a short time because the adsorption probability decreases in a short time with increasing the amount of non-condensable gases adsorbed to the adsorbent. In case of pumping hydrogen at high flow rate, it is advisable to operate intermittently rather than continuously to maintain its pumping capacity.
Hydrogen, one of non-condensable gases, is not only a component of outgas but also vital for application, therefore specifications are determined in detail. There is few data for neon because it is not used in common. Also, for helium which is hardly likely adsorbed, it is not recommended to pump them by cryosorption since they can be pumped about 1% to 0.1% of hydrogen. 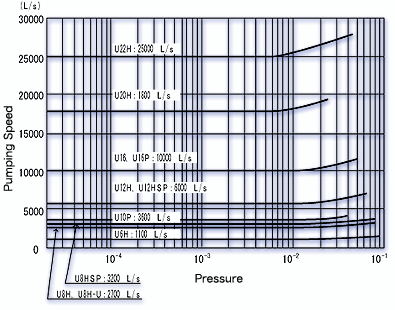 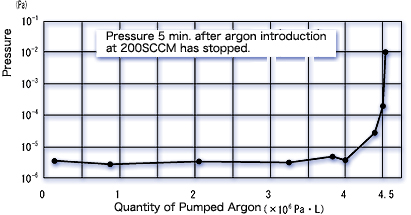 NOTE: Pumping capacity for N2 is approx. equal to the value above divided by 1.3.
Table 6:Pumping Capacity for Argon

Non-condensable gases such as hydrogen, helium, and neon are pumped by porous materials attached to inner surface of 15K cryopanel since they will not condense at 10K and will not pumped by the metal surface. Therefore, not only will the capacity be limited to fractions of a monolayer, but the pumping speed will decrease as the surface coverage increases, and the cryopump will lose its pumping ability at last. When the pumping speed for hydrogen drops to 80% of its starting value, ULVAC CRYOGENICS defined the quantity of hydrogen pumped as the pumping capacity for hydrogen. The adsorbent should be kept clean to attain its adsorption ability. Contamination of adsorbent is caused by:
① Adsorption of condensable gas such as air.
② Adsorption of water
③ Adsorption of oil vapor
Adsorption ability may be decreased by adsorbing large quantity of substances above. Air and water can be removed from cryopumps by regeneration while oil vapor cannot. If oil vapor is adsorbed to 15K cryopanel(Adsorption panel), the panel is required to be exchanged. Thus, avoid backflow of oil vapor to the cryopump to maintain its pumping ability for hydrogen.
Figure 6-5 shows pumping speed for hydrogen and quantity of pumped hydrogen. In this figure, “S” represents pumping speed and “C” represents pumping capacity. Refer to Table 6-4 for various cryopumps pumping speed and capacity for hydrogen. 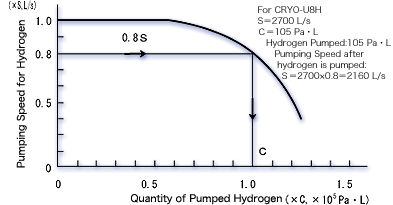 4.Thermal Load and Maximum Throughput
The thermal load to cryopumps is generated not only by heat radiation from the equipment, but also heat from gases such as thermal conductance or heat transfer with condensation. They are given by the following equations:

Use Table 6-8 as a measuring of the maximum amount of gas pumped for air.
For example, in case of U8H, the maximum permissible crossover pressure(Pmax) for a vacuum chamber of 100L is:
Pmax ≦133000Pa・L/100L＝1330Pa
Thus, the roughing pressure is below 1330Pa. For safety reasons, it shall be 665Pa.
For more safety measures(not to exceed 20K), take the value on the right column, then:
P＝ 20000/100 ＝200Pa
In case of large volume of chamber and roughing pressure of 40Pa or below, take special measures such as prevention of oil backflow, use of large cryopumps, and use of additional cryopumps to keep roughing pressure at 40Pa or more.

6.Ultimate Pressure
When there is no incoming gas into cryopump, the ultimate pressure for condensable gases is given by the vapor pressure and condensation coefficient(hypothetically 1 in here) for each gas as follows: 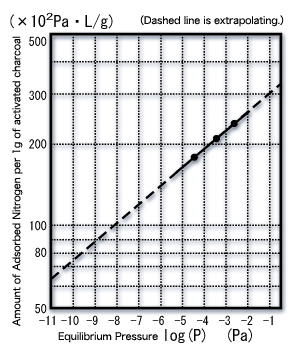 Please feel free to contact us about our product.
Our consultants will propose plans that fit your needs.